We introduce to you Jung-gu, the center of hyo culture. 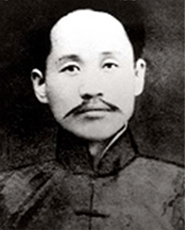 Shin Chae-ho
申采浩 1880 - 1936
Danjae Shin Chae-ho was born as the second son of Shin Gwang-sik and a woman of Miryang Park family clan at 233 Eonam-dong, Jung-gu on December 8, 1880 (17th year of King Gojong’s reign over Joseon).
Although the Goryeong Shin family clan resided in Nangseong, Cheongwon-gu, Chungcheongbuk-do for many generations, Shin’s father and mother moved to a hut near the grave site of his maternal family, Andong Kwon family clan, which later became the birthplace of Shin Chae-ho.
Three neighborhoods including Dorim-dong (also known as Dorimi) form Eonam-ri, which is a remote area in the valley formed by steep ranges of Daedunsan leading up to Bomunsan Mountain. Because the place where Shin Chae-ho’s home was located is reminiscent of a bird’s next, it is also known as Bongsogol (phoenix’s nest valley).
Danjae lived in poverty and hunger in this remote area until the age of 7.
As the 18th descendant of Bohanjae Shin Suk-ju, his family clan lived in Cheongwon-gu for many generations. Danjae’s great-grandfather Myeonghyu reached the position of Cheomchu (Jeong 3 pum) as a public official, and he was known for his excellent writing skills and penmanship. His grandfather Seongu served as Jeongeon (Jeong 6 pum) at Saganwon, a government office that oversaw and recorded the debates and disputes regarding the faults of the king, carrying on the legacy of his family of scholars. However, his family suffered a collapse due to the impact of foreign invasions and the turbulent political climate, and this left Danjae’s father with no choice but to leave his hometown and settle in the hut in Eonam-dong where his maternal family’s ancestors were buried. When Danjae’s father died prematurely at the age of 37, he was buried in his hometown, and Danjae and his mother of the Park family clan relocated to Nangseong where his father’s family clan resided.
Life of Danjae Shin Chae-ho
1880
~1900
Danjae Shin Chae-ho, who helped instill pride in his fellow Koreans while working as a journalist, historian, and independence activist during the Japanese occupation period, was born in Dorimi, Eonam-ri, Sannae-myeon, Daedeok-gu, Chungcheongnam-do Province in 1880. When his father passed away in the year he turned 8, he moved to Gwirae-ri, Nangseong-myeon, Cheongwon-gun, Chungcheongbuk-do Province.
With his traces left behind in Daejeon and Chungcheongbuk-do Province, he moved to Seoul in 1898 to study at Seonggyungwan, which was the foremost educational institution of Korea during the Joseon Dynasty, after which he led a life of a journalist, independence activist, historian, and writer.
1900
~1920
Danjae began writing editorials for Hwangseong Sinmun in 1905, and published “The Three Faithful Slaves of Japan,” “Where the Citizens of Korea are Headed Today,” “The History of Korean Autonomy,” and “Notice to the Advocates of Korean-Japanese Annexation Theory” in the Daehan Maeil Sinbo (Newspaper) and publishing such papers as “New Theory in Historical Reading” and “The Greatest Naval Figure in History: Admiral Yi Sun-shin.” Through these papers regarding historical relations, he revealed his nationalistic view of history centering on Dangun, Buyeo, and Goguryeo.
In addition to his activities as a journalist, he was actively involved in Korea New People’s Association, a secret organization formed to resist against Japanese colonial rule, the members of which included Yang Gi-tak, Yi Dong-nyeong, Lee Hoe-yeong, Lee Dong-hwi, and Ahn Chang-ho. He was also an active participant in the Movement in Compensation for National Bonds.
Granted asylum by China in 1910, Shin Chae-ho organized the Liberation Association with Yun Sae-bok, Lee Dong-hwi, and Lee Gap among others and wrote 『A History of Joseon』 while in Manchuria. It has been reported that he contributed to the systematic organization of the ancient history of Korea centering on Buyeo, Goguryeo, and Balhae, based on the information he gained by climbing Baekdusan Mountain and exploring the historical sites of Goguryeo and Balhae such as the tomb of Gwanggaeto.
Involved in the establishment of the Provisional Government of the Republic of Korea in Shanghai in 1919, Shin became a provisional legislative member of the government.
1920
~1962
In 1922, he was invited by Kim Won-bong, the leader of the Heroic Corps, to Shanghai, where he wrote and announced the Declaration of the Heroic Corps, also known as the Joseon Revolutionary Declaration, in 1923.
The declaration advocating a people’s revolution by violence is considered to provide deep insight into the breadth and characteristics of Danjae’s nationalistic ideology in that it describes civilian forces, who grew while experience the oppressive rule of Japan, as those fighting against the imperialist system characterized by exploitation and inequality that was prevalent in the world at the time as well as the colonial rule of Japan. In the 1920s, Shin Chae-ho’s scholastic competency reached its height, with the publication of 「Ancient History of Joseon」, 「Ancient Cultural History of Joseon」, and「A Preliminary Study of Joseon History」.
Arrested in Taiwan in May of 1928, Shin Chae-ho was sentenced to 10 years of imprisonment by the Dalian District Court.
He was imprisoned at Lushun Prison, where he died of a brain hemorrhage on February 21, 1936 at the age of 57.
His remains were buried in Gwirae-ri, Nangseong-myeon, Cheongwon-gun, Chungcheongbuk-do Province, and he was awarded the Republic of Korea Order of Merit posthumously on March 1, 1962.